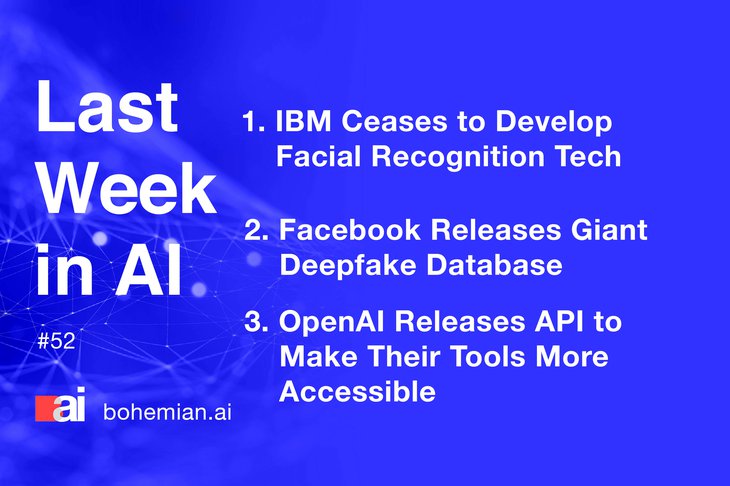 In a surprise move, IBM’s CEO announced that the company would no longer offer, research or develop facial recognition technology, and made a call to reevaluate selling such solutions to law enforcement. The company announced its decision through a letter addressed to the US Congress, stating: “We believe now is the time to begin a national dialogue on whether and how facial recognition technology should be employed by domestic law enforcement agencies.”

Facebook has released over 100,000 deepfake videos - fake videos of people that were generated by a computer. Facebook claims it released the videos in order to improve AI’s performance , as even the current best methods aren’t accurate enough. Creating deepfakes has become increasingly easy and there are worries that they might be used to spread political misinformation, albeit the vast majority of deepfakes produced so far have been for pornographic purposes.

Accessing OpenAI’s tools has just become a lot easier. The company recently released an API which will allow developers to call its tools on ‘virtually any English language task’. OpenAI is the company responsible for the popular text generation system GPT-3. In their announcement, the company said: “We hope that the API will greatly lower the barrier to producing beneficial AI-powered products, resulting in tools and services that are hard to imagine today”.